← more from
Slovenly Recordings
Get fresh music recommendations delivered to your inbox every Friday.
We've updated our Terms of Use. You can review the changes here. 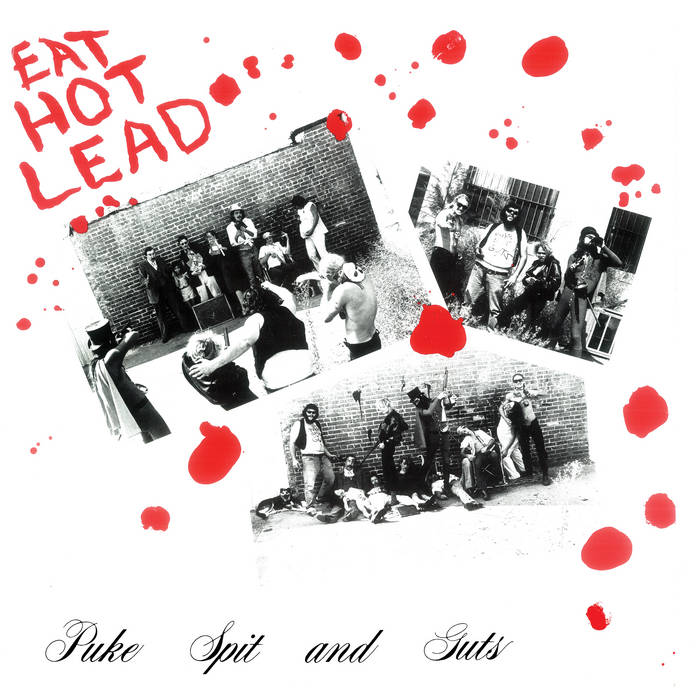 “Most extreme of all in music and attitude was PUKE SPIT & GUTS from Southern California - their album was subtly titled Eat Hot Lead. They’re none to subtle about how much they hate having to play with punk bands, even though they sound like them. In L.A. they even had a run-in with an original D.C. hardcore band, The Teen Idles (Ian MacKaye pre-Minor Threat; Henry Rollins was their roadie). Seems Ian borrowed their bass amp and blew it up. P.S.& G. chased them all over the parking lot outside Madame Wong’s (a punk club)!”

A crew of spirited So. Cal. weirdos, as opposed to mere punks, Puke Spit & Guts released the LP on their own Important Records label in 1980. Members Donny Death, Captain Worm, Dick Head (real name!), Marie Manslaughter and Stuicide assembled this absurdist and raunchy LP with the unholy shrieks of human victims being fed into a countertop blender between each track. On the opening cut - the PS&G theme - Death declares most bizarrely and brazenly “Sex Pistols couldn’t their liquor, Ramones wear tennis shoes! Alice Cooper is a party pooper, we’re the punk band for youuuu!” On “Kill for Kicks” he proclaims “I’m so tired, I’m so bored, I don’t wanna live no more! Life is a fucker and I’m a whore!” And it only gets weirder from there. Marie Manslaughter lets you know if you wanna get some of her fine lovin’ you gotta self-mutilate on “Send Me Your Ear,” and even then, anal sex is outta the question on “You Ain’t Never.” We’re not even gonna attempt to tell you What Captain Worm is yelling about on the title track.

This one-in-a-million scumbag rarity makes a killer companion to your Mentors, Jabbers, Broken Talent, and We’re Loud records. Check the full story / interview by Laurent Bigot in the upcoming issue of Ugly Things Magazine (#45). A limited pressing of 100 copies (mail-order only) on blood splattered clear vinyl includes an autographed 8x10 photo of Marie Manslaughter, and as a Bandcamp download exclusive, there are 24 rare photos + 10 bonus tracks: live material from 1979, outtakes from the ERRATIC session (Capt. Worm’s post-PS&G project), one track from Worm’s last ever recording session (1984), a KROQ album giveaway aircheck, and a 2001 recording by DONNY DEATH JR. and the PUTZ.

Bandcamp Daily  your guide to the world of Bandcamp

The Hammer and The Relentless from the Boston band Malleus stop by for a chat.